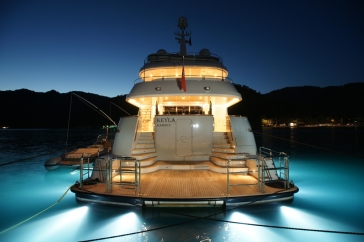 RMK Marine and Hot Lab Yachts & Design Studio, the Italian design firm, is proud to announce that M/Y Keyla, 45 metres superyacht refitted and rebuilt at RMK Marine and interior designed by Hot Lab – Yacht&Design studio in Milan (Italy) have won the 2014 World Superyacht Awards for the rebuild superyacht category - held in Amsterdam on 3rd of May,2014

Attending the Awards Ceremony 2014, Antonio Romano and Enrico Lumini of Hot Lab, the RMK Marine Yacht Division Director Rick Van De Wetering and Client’s project manager Mr. Mark Poirier. Antonio Romano refers: “This is a great satisfaction and an outstanding honour to be awarded for the 2014 World Superyacht Awards in the rebuild category. Receiving this award is a remarkable experience and we want to share with the other participant’s and thank them all kindly for their creativity, inspiration and workmanship that made Keyla WSA Winner. Without the belief, dedication and support from our Clients, our team, our contractors no great projects would have been realised. This award is an outward and visible sign of our firm's ability”.

The judges chose M/Y Keyla, launched by Trinity Yachts in 2003 on the strength of a most comprehensive rebuild that totally upgraded and altered the character of the yacht. A team from RMK Marine working with the Client’s own team and sub-contractors, completely stripped out the former interior and replaced it with a new design from Hot Lab Yacht & Design, while all decks were re-laid with teak, and the entire stern area was rebuilt, adding 2.5-metres to the overall length.

M/Y Keyla is originally 43.3 metres motor yacht built by Trinity Yachts and refitted at RMK Marine, with an aluminium semi- displacement hull and superstructure, and two MTU/DDC 16V2000 engines, 3,600HP. Revamping the interior for the new Client's lifestyle and needs meant that substantial stylistic changes has been introduced as well as several technical updates involving equipments. Hot Lab re-designed the entire yacht in the direction described by the Client.The contemporary interior style has been created from scratch along with multiple updates on the exterior of the yacht.

This remodelling also incorporated new stairs to the bathing platform that, itself, was enlarged and custommadefoldable sea-stair incorporated to provide easier access to the water. Mechanically, the engine room machinery and systems were either replaced or renewed by highly experienced RMK Marine team. The judges felt that this rebuild, which was finished with a complete repainting, has given the yacht a new life and was well worthy of a Neptune.